Research Under The Microscope Series

The research evidence supporting the use of specific nutrition, diet and food interventions is getting larger all the time and translating new research is often difficult and time consuming.  Also, certain research findings such as those from cell or animal studies have limitations when attempting to translate into human clinical practice and must be done with caution.

The aim of “Research Under The Microscope” series is to translate research papers that are quite often technically complicated, extremely lengthy and contain large amounts of data into simple everyday language making it quicker and easier to understand the research findings.

Alzheimer’s Diseases and the Role of Phosphatidylcholine-DHA 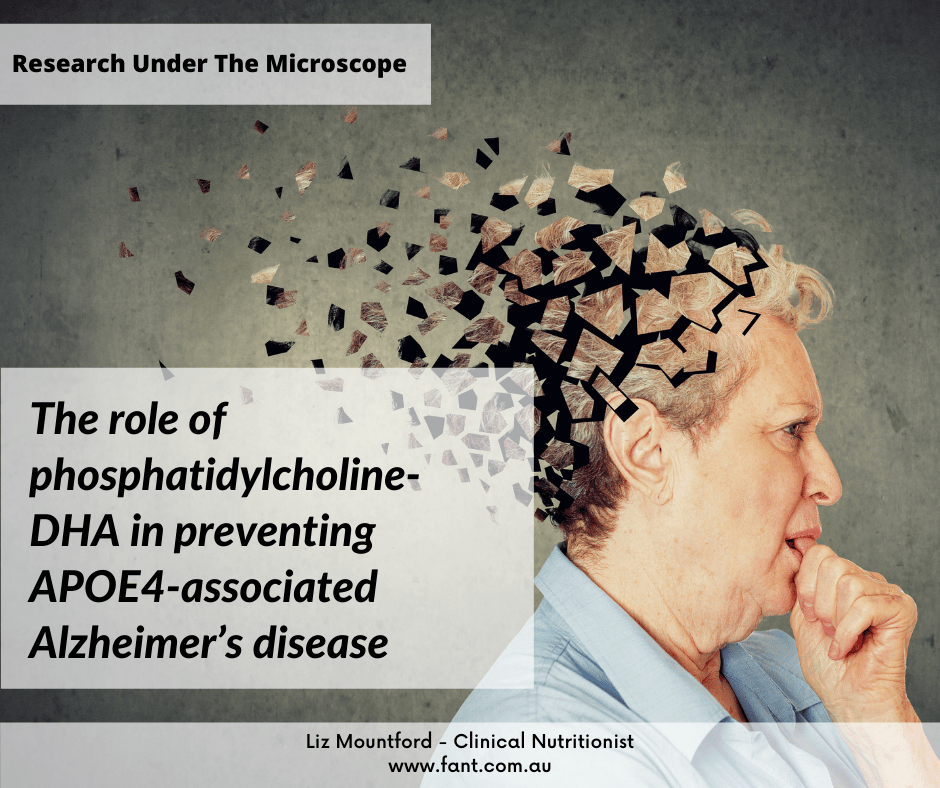 What is the problem and what is known so far?

Currently, there is no cure and treatments are usually based on managing symptoms.

Intakes of Ω-3 (omega-3) fatty acid docosahexaenoic acid (DHA) has been observed to reduce the risk of AD and ease the symptoms of cognitive decline.

Low levels of Ω-3 DHA fatty acid have been demonstrated to promote all 3 hallmarks of AD which include:

What is the background to this research?

The apolipoprotein E (APOE4) allele is to date the highest factor in determining the risk of AD. Previously it has been observed that sufferers of AD with the APOE4 single nucleotide polymorphisms (SNPs), respond more favourably to food sources Ω-3 DHA fatty acids as found natively in fish, rather than supplementary forms such as fish oil capsules.

What was studied in this research?

The researchers wanted to understand the mechanisms behind why sufferers of AD with the APOE4 single nucleotide polymorphisms (SNPs) respond better to the Ω-3 DHA fatty acids in dietary fish rather than fish oil tablets.

How was the research performed?

This research looked at all the current knowledge of AD and the cell changes seen in people with AD. The researchers reviewed how cell changes in people with AD might impact the metabolism of the different  Ω-3 DHA fatty acids found in food sources vs supplement sources. In doing this, the researchers were able to propose a clear  mechanism on why dietary fish is more effective than fish oils in AD sufferers with the APOE4 SNPs.

What did the study researchers find?

The researcher found that Ω-3 DHA fatty acids is packaged differently between food and most supplement forms. DHA in seafood sources metabolise to a phospholipid form known as DHA-lysoPC and is transported into the brain using a specific transporter, the MSFD2A which is found on the inner membrane of the endothelial cells that line blood vessels on the blood brain barrier (BBB).

What is the take home message?

What You Can Do Now

Start to incorporate some of the foods suggested above into daily meals. Changes don’t need to happen all at once. Small changes can make an enormous difference.